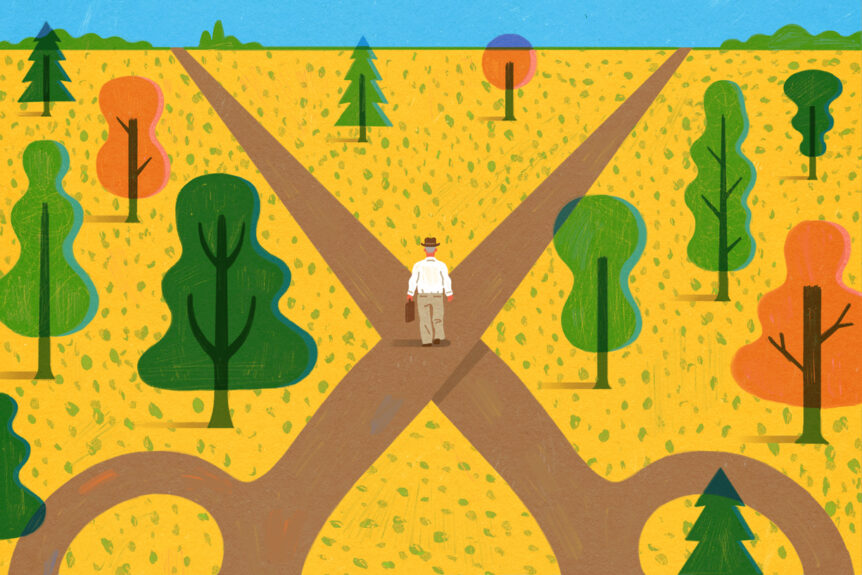 More Americans are working longer — and saving for retirement into their 70s. Last year, Congress stepped in to give these older savers a new tax break, making it easier to use traditional individual retirement accounts. But figuring out whether to take advantage of the new rules requires some work.

The share of retirement-age Americans participating in the workforce crossed the 20% mark for the first time in 2019 — that’s double the rate employed in 1985 — thanks to longer life expectancies and better healthcare. That means more than 10.6 million Americans were working or looking for work past age 65 last year, according to the Bureau of Labor Statistics.

In recognition of these changes, Congress altered the rules on how and when older Americans can save for retirement with the passing of the SECURE Act late last year. Now, people can invest in a traditional IRA past age 70½, as long as they’re still earning income. In addition, the age at which these investors are required to begin making withdrawals was lifted to 72 from 70½.

The changes bring traditional IRA accounts more in-line with Roth IRAs, which have no age-limit for contributions and do not require minimum distributions, except for those who have inherited accounts.

The new flexibility could be crucial as older Americans who do continue working tend to be college-educated and, if they are, earn an average of $78,000 a year—leaving many with opportunity to save. Still, now that traditional IRA investors have gained extra flexibility, you may need to figure out which type of IRA — traditional or Roth — works best for you. The question is complicated, hinging on factors like how much you earn, your life expectancy and even what you pay for Medicare.

Of course, the tax savings — which may amount to hundreds or even thousands of dollars, depending on your situation — mean a little extra work could be well worth your time. Here are five things you need to think about:

Your Current and Future Tax Rates

The first thing you should think about when choosing between a traditional IRA or a Roth, is your income — and whether it will be higher now, during your last few years of work; or higher in retirement, once you start making withdrawals.

The reason has to do with your tax rate, and the most fundamental distinction between the two types of individual retirement account. For traditional IRAs (as well as traditional 401(k)s), your contributions are tax-deductible upfront, in the year you make them. However, once you retire and start withdrawing your savings, those withdrawals count as taxable income and you pay tax on them based on your income tax bracket.

Roth IRAs work the opposite way. You pay tax upfront on your contributions at your regular income tax rate each year, but later in retirement are allowed to withdraw tax free.

The upshot, according to financial planners, is that you should aim to pay taxes whenever your rate is lowest. That means for high earners a traditional IRA, which allows you to put off taxes until your income falls in retirement, may be the smartest move. On the other hand, if your top-earning years are well behind you, and you are working merely to make ends meet for a few years before you start tapping your hefty retirement portfolio and Social Security (also taxable), then a Roth IRA could be a better bet.

One rule of thumb: “If you’re in the 24% or lower tax brackets, put your savings in the Roth,” says Houston, Texas, financial planner Scott Bishop. “The tax deduction you’d get today is worth less than the tax-free growth and withdrawals of the Roth IRA.”

One other thing to keep in mind, if you are a top earner, is that income-eligibility restrictions for Roth IRAs mean Uncle Sam may have already made a decision for you.

What’s more, if you or your spouse are covered by a 401(k) plan at work, then a separate set of caps applies, this time to traditional IRA contributions. Single filers, covered by a workplace plan, earning more $75,000, get no tax break for contributing to a traditional IRA. (The phase out starts at $65,000).

Because traditional IRA holders have never been taxed on their earnings, the IRS requires them to start withdrawing a portion of their savings each year, starting after their 72nd birthday, regardless of whether they need the money or not. (Before the SECURE Act’s passage, these distributions started at age 70½.)

These mandatory withdrawals, known as required minimum distributions or RMDs, are calculated based on your age, life expectancy, account balance, and spouse’s age, if 10 years younger than yours. (These IRS worksheets can help you determine your annual RMD.) Fail to withdraw the full sum and you’ll owe a 50% tax penalty on the remainder still in the account.

Those who save in a Roth IRA, however, are not required to remove money at any age.

Of course, RMDs can push you into a higher income tax bracket, meaning you will pay a higher rate on part of your income. What you may not realize: RMDs can also push up your health insurance premiums and even reduce Social Security payments.

While it’s easy to overlook how your income can affect Medicare and Social Security, it can be a big mistake according to Pewaukee, Wis., financial planner Brian Behl. “Missing these different tax brackets by even just a little bit is a very, very costly mistake,” he says.

Your Current Mix of Investments

One piece of good news for investors is that it’s not necessarily an either/or choice between a Roth and traditional IRA, in fact financial planners say the best way to maximize your flexibility is to maintain both. “You want to have some diversification,” says Baton Rouge, La., financial planner James Bayard.

For instance, if you had to replace your roof in retirement and only had tax-deferred accounts, like a traditional IRA, you would have to pull out $11,000 or so to get the full $8,000 you need to pay for the roof, because you’d have to factor in the income tax payment on the withdrawal, says Bayard. And, then that additional income you took out, say on top of your RMD or work earnings, could negatively impact your Medicare premiums or Social Security. But if you could pull that $8,000 sum from a Roth IRA, you might be better able to manage your taxable income.

You ultimately want to pay the least amount of taxes necessary over your lifetime, which is why diversity is the goal rather than just a low retirement tax bill. So if you’re someone who has saved in mostly traditional retirement accounts, like an IRA or 401(k), it may be worth adding a Roth — and vice versa.

One of the SECURE Act’s least popular changes, the elimination of the “stretch IRA,” means beneficiaries of an inherited traditional IRA can no longer stretch distributions and the associated tax payments out across their own expected lifetimes. Instead, they must withdraw all money from the account and pay the associated income taxes within 10 years. (Only spouses and chronically ill or disabled beneficiaries are exempt from the change.)

“This is the biggest change in the SECURE Act and will impact the most people,” says Charlotte, N.C. financial planner and CPA Ann Gugle.

The new rules mean that, if you really want to leave your heirs an IRA they can enjoy free and clear — without the stress and complexity of future tax bills — a Roth may be a better bet. If you want to maximize the account’s value, then the answer is less clear and chances are you will have to sit your children down for some careful inter-generational tax planning.